From mid-July until the opening reception on September 7th I have been putting together my third solo show, Inner Realms. This was my first solo show outside of any university affiliation and an important opportunity to highlight some of the most ambitious pieces I’ve made in the last couple of years. Additionally, it was also an opportunity to weave together diverse yet interrelated pieces into one gallery space.

The title Inner Realms describes the internal psychological visions of my subjects expressed by means of personal dress and decor. Fashion becomes costume, gesture becomes performance, and the gaze becomes a window into a tailored psyche. American sociologist David Riesman draws a distinction between those who “passively accepted commercially provided styles and meanings, and a ‘subculture’ which actively sought a minority style … and interpreted it in accordance with subversive values.” Thus, my models were chosen due their dedication to the expression of their particular subculture.

Inner Realms featured nine works on paper which were made between 2015 and 2018. Starting on the first wall, I had a couple of large mixed media drawings featuring females portrayed in imaginative gothic scenarios. In the piece “Lamb,” from 2015, a girl dressed completely in black with blue hair and black devil-horns is sitting next to a brick fireplace and reading a book. In the piece “Nigredo” from 2017 a semi-nude female figure is standing in a liminal crossway, inside an impossible cathedral space. Her head is that of a crow and a murder of crows are flying frantically next to her, creating a dark intangible shape. These two large and mostly-black pieces were hung side-by-side, framing one out of three entrances into the gallery space.

On the second wall I had two intricate paper-cut drawings which are designed after two tarot cards: “The Magician” from 2018 and “The Empress” from 2017. I was inspired by early byzantine art and Medieval illuminated manuscripts for these two pieces so they are heavily decorated in flattened patterns, and painted in red and gold.

The following wall holds “Inner Realms I (Oscar’s Boy)”, from 2018, which is a figurative painting of a rather androgynous young man in a seductive self-aware pose. He is surrounded by rich colors and patterned fabric. In contrast, and next to this piece, is a mixed media drawing called “Dreaming of Bruges (Homage to Fernand Khnopff).” A female figure  is dreamily reflected in a haze of charcoal which emanates in a circular form, slightly off-centered. On the top side of the reflection, the real-life portrayal of this girl is drawn with ornate furniture behind her, yet in the reflected side the city of Bruges is behind her. Bruges was used frequently in the work of the symbolist painter Fernand Khnopff as an emblem for a nostalgic utopia. Surrounding the spiral haze engulfing the double-portrait in the center of this drawing is an intricate geometric  paper-cut pattern.

Finally, on the fourth and final wall two pieces which combined paper-cut, Straw Marquetry and oil painting sandwich a portrait of a young woman in high fashion clothes. All these three pieces are from 2018. They first and third piece on this wall are “Inner Realms II: (Inside Rooms),” and “Inner Realms III (Behind Closed Doors.)” For both of these pieces I created silhouettes of Victorian-style dollhouses using a paper-cut technique.  A figurative oil painting was either suspended upon or embedded within the dollhouse facade. The dollhouses are symbolically reminiscent of my childhood, the origin of my personal internal visions and use of play as expression, but they also act as a placeholder for the archetype of “home.” The portrait in the center is of a clothing designer who is wearing one of her own creations: a white lace frock and large gold earrings behind a deep red patterned background.

For all works mentioned, I start my process by shooting photographs of my friends in their own personal environment. After the models are photographed, I choose the composition I like best and then instinctively decide if the image should become a straightforward oil painting or if I should include paper-cut and collaged elements into the image. I design the image with a rough idea of the outcome, yet allowing for plenty of impromptu design decisions to occur. Working on Arches Oil Paper allows me to draw out the entire composition, including both the figurative oil-painted region and the paper-cut/collage region, and then work on the separate parts in tandem.

My urge to focus on subcultures (Goth, Dandy, Punk, etc) as a focal point of my work has re-emerged from a couple years of dormancy. In addition to clothing and fashion being a dominate signifier of subculture, I am also interested in home decor and our daily performances as outward displays of our identity. Relating to my background in theater, I am interested in the way an actor dons on a costume to play a certain role. The stage is set with props, and in conjunction with the costume and gestures the audience can read the important details of a scene even before the actor has uttered a word.
art art blogging art journal art of Emily Babette artist contemporary art emily babette fa4 collective figurative art fine art Fullerton Art Walk Gothic Art Hibbleton Gallery Inner Realms TBD 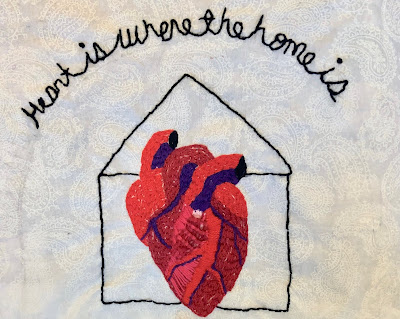 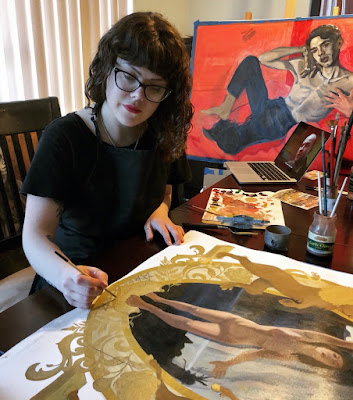 As I am getting older the concept of time is becoming a more frequent subject in my thoughts than ever before. Summer has been slow to announce it's self this year in Southern California, taking it's time to increase it's intensity incrementally, degree by subtle degree. Alas, I do feel that it is finally upon us at last... and we are in for the long and lethargic drudge through the blistering summer months.
There is something so very nostalgic about the summertime for me. When I was a child in Canada, Australia or Connecticut summers were synonymous with holidays, freedom from school, and long lazy afternoons pleasurably spent wasting time. My, how times have changed...
I do believe it is the predicament of the creative person to feel as it there is never enough hours in the day and never enough production happening within those hours to be satisfied. Unlike the long dreamy summers of my childhood, where a day spent rearranging all the books on my bookshelf alphabetical…
Read more 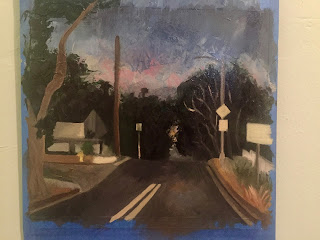